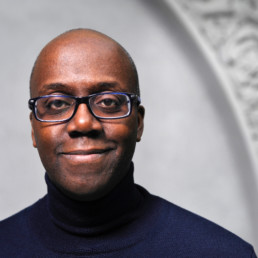 Robert Mitchell is a London-born, multi-award-winning pianist, composer, band leader, teacher and writer. Growing up in a musical family, he began piano studies at the age of six in the United Kingdom’s conservatory system. Exposed to a wide range of genres, including soul, R&B and the popular music of the Seventies and Eighties, he developed his own unique style while pursuing his formal education at City College of London where he graduated with a BSC degree.

A Steinway Artist and a Roland as well as a jazz piano professor at the Guildhall School of Music and Drama and a principal lecturer at Leeds Conservatoire, Robert performs solo and also leads the groups Panacea, Epiphany3 and True Think. He has released eleven albums.

Jazz Steps called him “One of the most outstanding pianists performing in the UK today.”

As for his verse in performance, Andrew Read wrote in Jazz In Europe: “The original poetry …  is poignant, at times provocative and deals with issues that are highly relevant – perhaps even a manifesto for the creative thinker.”

Regarding his first book of verse, A Vigil For Justice. A Vigil for Peace, Eugene Skeef wrote: “In this collection of poems Robert Mitchell brings a unique harmonic vocabulary to his written work in the same way that he imbues his music with a linguistic eloquence more conventionally associated with impressive poetry. His poems are like symphonic scores excavated from the vault of a futuristic cave inscribed with glyphic invocations, each metaphor in pristine condition on the reverberant walls of his finely tuned mind.”